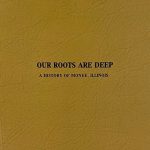 Our Roots are Deep was published in 1974 by Muriel Mueller Milne. It remains today the most thorough and comprehensive history of the Village of Monee and its people in existence. Muriel Sophie Marie Mueller was born in Monee to Emmet and Esther (Jacobs) Mueller on March 10, 1922. She was baptized and confirmed at St. Paul’s United Church of Christ. On June 29, 1947 she married Willam Henry Milne, the son of Alexander and Dorothea (Grote) Milne. She served as Editor of the Monee Monitor from 1963-1969, and was an accomplished artist; many of her works gracing the walls of homes in Monee and the surrounding areas. Fascinated by Monee’s pioneer history, Muriel served as chairman of the Monee Centennial Committee and was a huge part of it’s planning and execution. Monee’s Centennial Celebration was in 1974, which coincided with the publishing of her incredible book about Monee. The scope of the information contained in Our Roots are Deep is especially impressive given the time and limitations she faced in the early 1970’s, when genealogy and this type of research was in its infancy. There was no internet to aid in her fact finding. She must have conducted dozens of interviews to get all the information she included in her book. The hours of painstaking note-taking and record-gathering undertaken would have been in the hundreds of hours. Sadly, Muriel died November 29, 1974, only months after her book was published. She was buried in Skyline Cemetery, just north of Monee, on December 1, 1974. As a result of her work, many future generations have been helped and informed by her book and her legacy to Monee will never be forgotten.